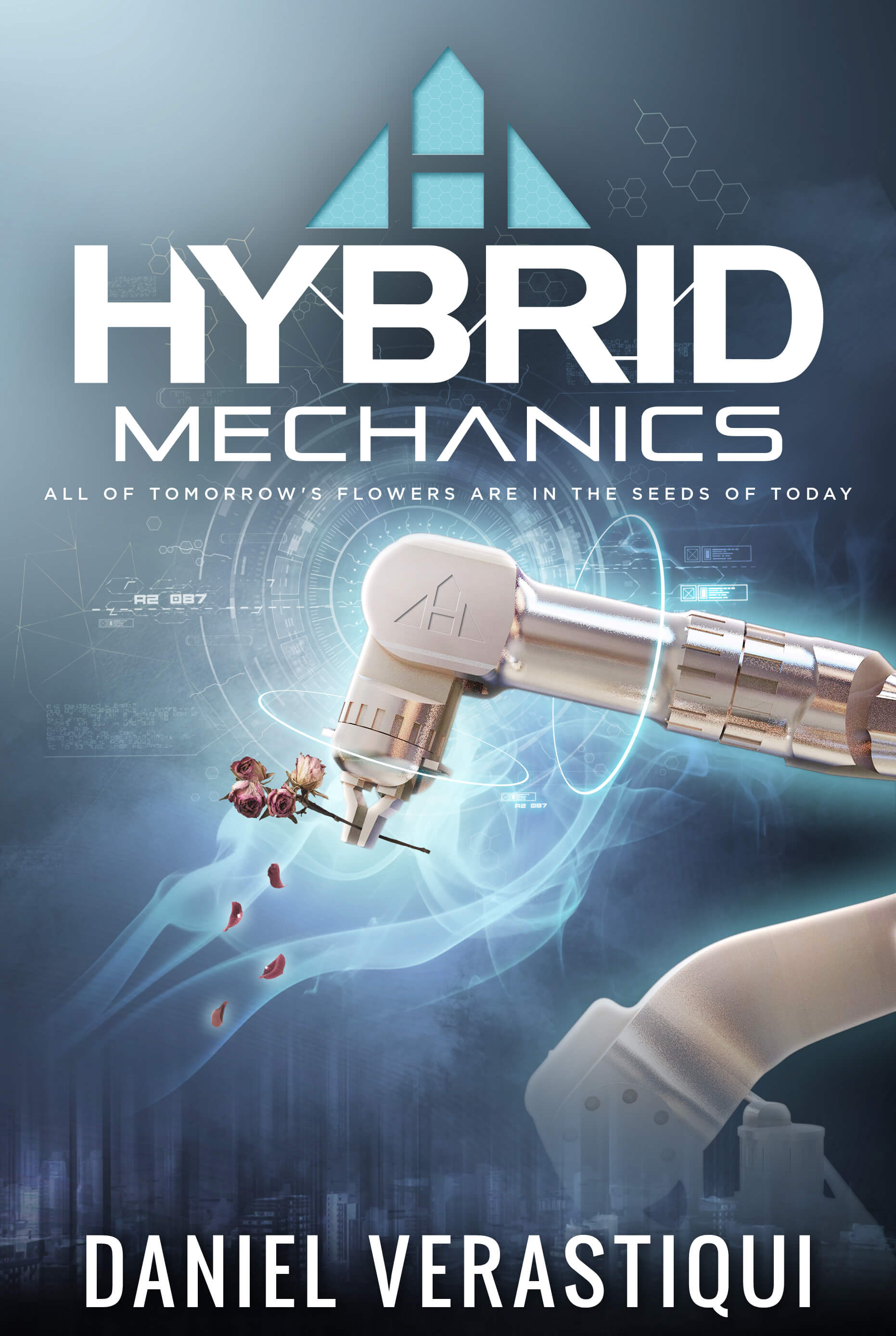 Jake huffed, stuck his bloodied hand under his armpit. His body trembled as he shifted into a low-power mode that gave off very little heat and almost not exploratory network traffic. He didn’t need to sleep, of course, but there was little else to do while he waited for the nanos to repair the damage in his body. They had already closed the hole in his stomach, but the wound still ached, still seethed an uncomfortable warmth when he touched it.

Sleep came in jerky, stuttering cycles, and Jake did not dream. Instead, he ran through his recent history, replaying scenarios, looking for ways he could have done better. He found optimal responses for everything from Gabe’s shitty welcome to the mannequin in VNet to the idea that he needed companionship.

True synthetics didn’t need artificial social constructions; they were part of something bigger already. They weren’t like organics who trembled when they found themselves alone in the woods. If Jake wanted a friend, he might as well go full organic and get himself a—

Filters flitted across Jake’s eyes automatically. Something moved beyond the opening to the alcove, something burly and low to the ground. For a moment, Jake thought it might be Michael Four crawling along the rock, but the way the thing moved, the way its eyes burned a demonic red, told him it was something else entirely.

Armando Carrillo has always lived with the nagging feeling that the world wasn’t real, but he never expected to wake up naked in an abandoned underground bunker with a computer screen behind him flashing the words CLIENT DISCONNECTED.

After the discovery that his life in Austin, Texas was nothing more than a computer simulation, Armando must unravel the mystery of his true existence and figure out who put him in the simulation in the first place, and more importantly, why.

With ancient generators spewing noxious gasses into the underground facility and massive screens flashing ominous warnings, Armando will have to find a way to escape his cavernous tomb, not only to save his life, but the lives of the three other Austinites who were plugged in with him.

Set in the Vinestead Universe and brimming with twists and clever one-liners, Hybrid Mechanics is another irresistible mash-up of technology, mystery, gunplay, and subtle sexual tension from Science Fiction author Daniel Verastiqui.

Hybrid Mechanics is independently published. If you enjoyed the book, please consider leaving a review at Amazon and/or Goodreads.

This is a fun book. There were quite a few times I thought it was getting rather predictable before something happened to prove me wrong. Full of ingenuity. The author does an excellent job during the thriller portions. Some exposition here and there, but overall necessary to understand the greater Vinestead Anthology universe (this is the fourth book in the series I've read).

It may be Verastiqui's best novel so far.

It's hard to review this book without giving anything away.

We follow 2 timelines. (This is not a time travel book.)

In the future, there's an evil genocidal synthetic (robot) out to purge the world of pesky humans.

Meanwhile in August of 2017 in Austin, TX, we follow a Youtube blogger, a Brinks driver, and a tech worker living their lives. Something doesn't seem right about their world, and I don't just mean Youtube commenters.

Well written, and the Austinites are good relatable characters.

The book stands on its own. This is most closely tied to Perion Synthetics and to a lesser degree the other Vinestead novels, but you don't have to have read any of those previous Verastiqui/Vinestead works (including Perion Synthetics) to understand or enjoy this book.

No sex in this one, but lots and lots of violence in the future.

Another great work from Daniel

The 5th book in the Vinestead Anthology did not disappoint... great character development and story line. Keeps the reader intrigued throughout with enough twists and turns to keep the pages turning. I cannot wait for the next installment to see where Daniel takes us next.

Fun book to read, really draws you in to the world and the characters. Left me wanting to read more! A little extra on the swearing.

This was a great read. There are several storylines that are advanced throughout and the way in which everything is brought to resolution was, for me, very satisfying. The book manages to stand on its own, meaning you donâ€™t have to have read the earlier books to enjoy it; however, those who have read the others will have a different and perhaps richer appreciation for what the author has done here. If youâ€™re a fan of sci/fi this is a great read. If youâ€™re a fan of the authorâ€™s earlier work itâ€™s a must read. Good pacing and just an all around well done book. I could make comparisons to other books that are in a similar vein but donâ€™t want to spoil the experience or mislead anyone. Just read it, you wonâ€™t be sorry.

My new favorite book by Daniel Verastiqui. I was wondering since the cover blurb gives away some of what the story is about. But even though you think you know where it's going, there are some surprises. All in all, a fun story and well written. A lot of Austin, TX references, if you're into that.

This is first book I have read by author Daniel Verastiqui and I thoroughly enjoyed it! I will now go back and read the rest of his books.

I really enjoyed this book!

Have you been begrudgingly perusing political news headlines, day after day, and think to yourself, "this can't be real"? Hybrid Mechanics, Verastiqui's 5th installment in the Vinestead Universe, answers back, "what if it's not? What if this is all a simulation?"

I've been following Verastiqui's work since Xronixle â€“ his first â€“ and I've had the pleasure of seeing his writing continuously improve, culminating into this fantastic mix of Cyberpunk Futurism and modern-day existential crises of the true nature of reality.

This book follows a group of strangers in non-linear fashion, including a burnt-out IT manager, a tenacious YouTube personality, and an ex-GI mamma's boy and man of faith, who through a series of "glitches" find themselves woke in the real world. Where are they, how did they get there, and who put them there? Verastiqui weaves a cunning narrative that answers these questions while raising even more, reaching a nail-biting denouement that will send shivers down to your solar plexus.

Verastiqui's trademark descriptive style and signature wit is thankfully present throughout the story: clever dialogue, multi-dimensional characters, sexual subtleties and exploring of gender identities, The Matrix-style virtual realities, religion, synthetic humanoids, and cliff-hanging chapter conclusions that only makes you want to keep reading. Pop culture-savvy readers will enjoy Verastiqui's humorous allusions, and if you're familiar with the Austin, TX area you'll absolutely get a kick out of his local references.

This book is much deeper than the surface level would lead you to believe â€“ figuratively and literally. Verastiqui is at the top of his form and I can't wait for his next book.
GET IN TOUCH: Contact Form Amazon Twitter Goodreads
This website is built with PHP, MySQL, Bootstrap, and Parsedown. © 2021 Daniel Verastiqui