In today’s Thursday Roundup, we look at the things keeping me from falling too deeply into the soft arms of insanity. Who knew when we closed our doors five months ago that we’d still be standing at our windows wishing for a simpler time when we could go outside and mouth kiss our neighbors. Because that’s what we did before the quarantine, right? I don’t know; it has been such a long time. Such a very long time…

After switching genres to read Sara Gran’s Come Closer, I’m back where I belong with William Gibson’s The Peripheral. I’ve barely started, but already I’m reminded of his particular style of running long sentences together, as if commas are free and not $3.19 a dozen. The way he strings clauses together sometimes feels like you’re listening to someone tell a story and they just can’t help but tell you more than you asked for.

I went to the store, the one by the theater, you know, the old theater where they play the black and whites, the place where Judy and I kissed for the first time, there in the back, near the doors, under the glow of the fire exit sign, with no one the wiser, there freezing below the air conditioner vent, the smell of popcorn and freon in our noses, my nervous hand on her shirt…

Except, it’s William Gibson, and the more you read of this story, the more comfortable you become with it. There is always a learning curve with a new book as you try to figure out what kind of narrator you’re dealing with. Some of them stay out of the way and just give you the information. Others are characters themselves, and their style of storytelling might just be something you have to warm up to.

With less than two weeks before the release of Brigham Plaza, I’m not doing much writing. And honestly, I’m not finding much of the uninterrupted quiet time that I need to sit and write these days. After five months, the line between work life and home life is beginning to blur, demanding more of my time at all hours of the day. If I don’t bang out some words first thing the morning, the day is essentially lost.

Lately, there have been more lost days than not.

But I don’t worry. Soon the new book will be out there, and I’ll retreat from social media like some kind of Santa Clause Novelist who only shows up once a year to spam his friends and the Twitter Void with ads for his books. I’ll go back to the North Pole, shut the doors, and start working on something new.

I’m still trying to finish The Last of Us 2, but on days when I don’t feel like hating myself and the world, I turn to lighter fare. Enter Microsoft Flight Simulator 2020, a much anticipated update to Microsoft Flight Simulator OMG This Looks Bad Edition. I was able to sneak the purchase of this game and accompanying flight stick into the Things I Do With Matador budget group. He really enjoys flying the red one and likes to scream throttle and joystick anytime he moves them.

So is FS20 worth the $60 for the basic version? Depends on your computer, I think. I’m constantly upgrading my PC, and it recently ran the new Doom pretty crisply, but FS20 just grinds away at it like a teenager learning to drive a stick (or me driving a stick today). The time it takes to launch the game and get to a point where I can take off feels like forever… though I’m hoping that’s just launch woes, an effect of everyone trying to stream maps and weather from the servers at the same time.

How bad is the network congestion? It took a day to install the game. Most of the time, it just looked like this:

I’ll repeat the observation I made on Twitter the other day: Microsoft really missed an opportunity to make the loading screen an image of an airport waiting area. Then you could just sit there and watch planes take off and wonder why everyone around you isn’t wearing a mask.

There are precious few new movies being released these days, so Dom and I are working our way down the Top 100 Movies list to check out the movies we haven’t seen yet. This week, it was La La Land, a movie about a couple of kids just out there trying to do their thing, you know? And to top it all off, none of the songs were written by Lin-Manuel Miranda. So, you know, bonus.

As for my review of the movie: Emma Stone is a natural treasure.

Recently added to My Music:

This week’s featured Instagram account is @ts95studios. I’ve followed this account for a while now, and the book covers he produces are consistently awesome. I have no idea what he charges for a cover, but it’s probably worth it. I’m happy with the two covers I got from 99Designs, but honestly, when the next book rolls around, I’m reaching out.

It cannot be overstated how important a book cover is, especially for an indie publisher. Spend the money.

Picture(s) of the Week

Nothing more exciting than seeing your books out in the world.

Or at the beach…

REPOST: Paw Prints in the Poop – A Petrospective

Merry Christmas. I got you a book. 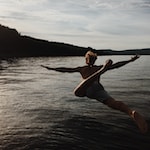 Diving head first into the shallow pool of Amazon Advertising