March 12th was a Thursday, and I had taken a half-day from work to go see Megan about a new tattoo. While there, we discussed the only news story that mattered: the corona virus. How would it affect business? Can you believe they cancelled SXSW? What would the future hold? An hour later, with my arm wrapped and tender to the touch, I said goodbye with what Fox News once called a terrorist fist jab instead of a customary handshake.

It felt silly at the time. To be so aware of this pending thing that was coming to change our lives.

The next day, Dom, Matador, and I began our self-isolation in earnest.

The news was pretty explicit about how dangerous Corona was, and yet the schools were still open, and people were still gathering for a transportation parade. I even noticed an elderly woman in a wheelchair and thought shouldn’t you be at home? That thought was immediately followed by shouldn’t we be at home?

It was a weird Friday. We could feel things starting to change. Of course, the whole concept of self-isolation and social distancing wouldn’t feel real until the next morning when Dom attempted to go to HEB.

That same day, HEB announced they were cutting hours in order to properly restock everything except toilet paper, which for some baffling reason, had completely disappeared. Though, the next morning, I went to Target (how I miss thee), and they had toilet paper there, so at least we had one less thing to be anxious about.

As the weekend came to a close, I started to think about going into the office. Austin still had no standing order to stay home, and my job hadn’t said anything about it either. I realized I had been waiting for my boss to send out a note saying work from home, but none had come. Then it hit me: why was I waiting for someone else to consider my safety (and the safety of my coworkers)?

I decided to send a simple email.

Within the hour, a general announcement was made. You could work from home if you preferred. I encouraged my team to do so.

As a technology company, we’re perfectly capable of switching to remote operations. With the exception of physically shipping products, there’s no reason anyone needs to be in the office at all.

People are still there. Gathering in offices and conference rooms.

It’s a small example of what is still happening weeks after the stay-at-home order.

It’s strange to see people gathering. Or at least, it was strange at first. Now it just makes me angry. Whether it’s multiple families and their kids at the neighborhood playground or people crowding the aisles at Home Depot, the message is still the same: I don’t have to take this seriously.

The COVID-19 numbers for Travis County show 690 cases with 9 confirmed deaths (as of 4/13/20). There are 1.2 million people in Travis County. From a purely mathematical standpoint, I can see why people would be tempted to brush it off.

But that’s 690/9 with social distancing and limited testing. It could be so much worse. In my mind, any given person’s response to the pandemic is just like their response to a stop sign when they’re out driving.

Most people stop. A few don’t give a damn and just roll through.

And while it makes me angry to see people barely pause at intersections, it doesn’t change the importance of most people choosing to stop.

Most people are choosing to distance themselves. And they are saving our asses.

The time calls for a collective sacrifice, and I’m happy to see most people answering that call.

The Sacrifice is Small

You’ve probably seen the phrase life isn’t cancelled floating around inspirational blogs and Instagram accounts. To be honest, it felt like that at first. SXSW, the NBA, restaurants, retail stores, parks… the walk-up window at the Walgreens pharmacy… things just started disappearing, and for a while, we didn’t know what to do.

People were losing jobs, their businesses, and… other people.

That we could stay holed up in our comfortable home with electricity, water, and food was a testament to the level of luxury we actually live in. With ourselves taken care of, we started to reach out to friends and neighbors, and at the same time, they reached out to us.

I didn’t even have to give up my birthday celebration… my neighbors made sure everyone knew I had turned forty.

We realized we were lucky. Even losing our weekly date nights at Target left us with more than most people have.

When a part of your life disappears, you can either lament its loss or fill it with something else. We decided to shake things up by potty training Matador, which has been a ton of poop-filled fun. Dom has taken on the role of his teacher during the day, keeping him engaged with counting and shapes and colors.

After school (read: when I get off work), I’ve been teaching Matador how to do the opening scream from Led Zeppelin’s Immigrant Song.

The extra time meant I could finish my work on Brigham Plaza, which is now available for pre-order on Amazon, hint hint. I’ve even started thinking of ideas for the next book.

Time is changing though.

Every day spent in the house.

Starting to go a little crazy.

People are talking a lot about when all of this will be over. I don’t see how it ends with anything other than a vaccine or mass extinction. The third (and probably more reasonable) option would be mass testing. Test everyone, isolate those who are sick, and repeat. But that would require a government capable of doing anything, and we just don’t have that here in America.

So we’re kinda stuck in this weird, indeterminate period… just waiting and wondering who is going to step up to the plate. It’s not gonna be a president who only cares for himself or a governor who thinks the economy is more important than your health.

It’s gonna be the people making masks in their garages and the ones 3D printing those ear-savers. You have to be optimistic that someone out there is trying to solve the problem. Luckily, optimism is something we do have in America. Some would say it’s all we have.

As quarantine weekends go, we had a good one this past Saturday and Sunday. Our family outing involved heading to Walgreens to pick up a prescription (drive-thru only, but mercifully empty), to the alcohol to pick up alcohol (rapid pick-up, order waiting at the door), and finally to Chili’s (curbside) for a good, ol’ fashioned overeating fest. It just felt so normal to stuff myself with honey chipotle chicken crispers and chips and salsa. I almost cried.

Our Quarantine Easter involved a small egg hunt, goodies from grandma, Matador’s teachers, and the easter bunny. I even got some robin’s eggs, which have been mysteriously absent since all this corona stuff started.

What all this means is all that stuff is still there, it’s just coming in a different way. We may not be able to hang out with our neighbors, but we can still holler at them over the fence. We can do trivia nights on zoom. We can FaceTime.

All you need to do to survive it is stay safe, healthy, and sane.

… find new ways to do all the things that make you happy. 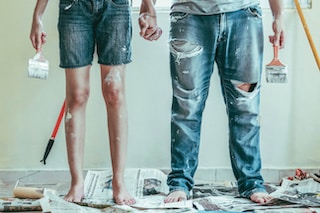 By Daniel Verastiqui April 13, 2020
1 comment
Notes From The Author