You and I are a lot alike. We’re both gluttons for punishment. We keep putting ourselves in situations where we know we’re going to get hurt. And you want to know why? It’s because deep down, under all that ego and fake smiles, we believe we deserve it. We’re unworthy of happiness. And that’s why, every few years, we get all excited and go watch another Terminator movie. And guess what? We only have ourselves to blame.

Terminator: Dark Fart is exactly what you would expect the marriage of 90s nostalgia and modern movie-making. It revisits all the old beats of the first two movies, over and over, just in case you’ve never seen them. It includes the modern dependence on CGI ragdoll effects that may never look real in our lifetime. It treads lightly on political topics without ever having the balls to just come out and say what it’s trying to say.

In short, Terminator: DTF is a Dark Mess. You know the story already: Terminator comes back through time, the resistance sends a savior, and 90 minutes later, it’s all good now. There are no twists, no real surprises. Sarah Connor walks the other characters from Chase A to Set Piece B to Exposition Scene C. Arnold gets beat up; you know how it goes.

Do you remember Star Wars: Rogue One? Remember how uninspired it was until the final two minutes with Vader? Remember how you wanted nothing more than to see more of that movie?

Well, sadly, the same things happens in Terminator: Dong Tart, except it happens at the beginning. About the first five minutes, I’ll say this: I generally don’t cry tears of joy during movies, but just between us girls, I almost did. Tim Miller gave us exactly what every Terminator fan has been waiting for since T2. He showed us what might have been.

And then that son of a bitch took it away and made us watch something else.

That said, it’s still a Terminator movie, and regardless of how much it hurts, you’re still going to watch it. And yeah, go ahead and see it in the theater–you’ll be less inclined to get up and walk away.

It’s Terminator. It’s a mix of old greatness and new staleness. The action is over-the-top and beyond what Sarah Connor should be capable of. The first five minutes remind us we’re never going to get what we want, so maybe it’s time to stop trying. Also, you never find out which character is Dark Fate.

Verdict: I’ll be back. I shouldn’t, but I will. 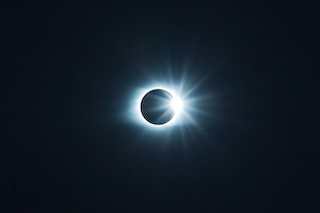