Somewhere along the way, the music shifted from an upbeat heart attack of hardcore techno to the mellow and near comatose strains of an unknown ambient artist. A low beat thumped in the room, resonating in G’s chest almost to the point of sickness. A forlorn trumpet scraped along the bottom of the treble clef, piercing the cloud of muted conversation, of glasses tinkling behind the bar, and of the low, satisfied moans of the couple in the next booth.

Fatigue was taking its toll and every minute that went by was excruciating insomuch as it wasn’t a soft bed and a gentle slice of code to sleep by. Already, he had picked out the cocktail that he would use to pass the rest of the night away. It was a mixture of pastels (of which he told no one) and sexual sensations (of which he sold to everyone). All of this over the soothing rumbling of some distant storm. Only the storm was borrowed content. The rest had been coded from scratch. The experience was made that much more special by the mere fact that it was his own creation.

The code cube pulsed on the table, running through the gradient of red so slowly that G couldn’t be sure it was changing at all. But its gradual phasing betrayed its inner workings. He knew that inside the cube, data was spewing out almost faster than Kurtis’ brain could take it in. He thought of the electrons flowing along the wire, wondered if the power would hold until it was finished, and whether Kurtis was going to need a doctor or not. Once, on a quick load in the alley behind Version Six, some poor newbie’s brain had fried, got totally cooked. It had something to do with the changes going on in the brain when the info came in, but Alessandra’s explanation failed to expose a root cause or how it could be avoided.

It was the cube that had been keeping G up and about during his extended sales pitch to Kurtis. He relied on it to pump his brain with enough endorphins and adrenaline to tolerate the crowd and brain-melting music. Now that it was attached to Kurtis, it took all of G’s energy just to remain conscious. His eyelids failed him for seconds at a time, causing temporal breaks in the music that irritated him to no end. His brain was skipping through time. Hopefully, there would be enough power left in the cube to get him home in one piece. Otherwise…

“You look like shit, G-man,” said a phased voice. G couldn’t locate it and struggled for several seconds before realizing that his eyes were closed.

Natalie had arrived and was sitting next to him on the vinyl bench. The front part of her hair was pulled back, tied somewhere behind her head, leaving her face primed for the decorating she had picked out for it. Blue-white streaks ran from her eyes to her ears, disappearing into her deep black hair. Red lacquered lips, deep blue eye-shadow, and eyelashes coated with some kind of luminescent paint that glowed in the black lights. She wore a white half-shirt, transparent enough to discern the petite breasts underneath. She had changed so much in the last few months. G hardly recognized the little blonde girl that X dated before he disappeared.

Photo by Sarthak Navjivan on Unsplash 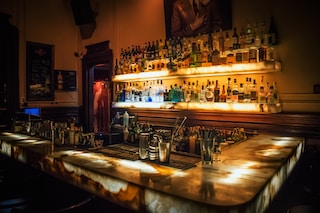 By Daniel Verastiqui October 16, 2019
Add comment
Notes From The Author